New Collection of Cartoons By Ruben Bolling Set to Release May 2020, This Will Be The 30th Anniversary of Tom The Dancing Bug

SAN DIEGO, CA (February 18th, 2020) – Clover Press and Ruben Bolling, the award-winning creator of Tom the Dancing Bug, are combining forces on the 30th anniversary of Bolling's weekly comic strip to release a new collection of cartoons. Tom the Dancing Bug: Into the Trumpverse is a complete collection of Bolling's comics over the last four increasingly politically divided years. 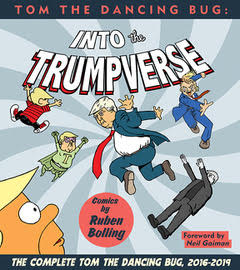 "I'm so happy to team up with Clover Press to celebrate Tom the Dancing Bug’s 30th anniversary by launching this series of books," said Bolling. "And it's appropriate to start with a Trump-themed book of the last four years, because just as Donald Trump has taken over every aspect of America’s consciousness, he achieved a hostile takeover of my comic strip."

Tom the Dancing Bug started in 1990 as a general humor comic strip, but as it became increasingly political, culminating with the Trump era, Bolling emerged as one of America's most important humorists and political commentators. The cartoonist won the prestigious Herblock Award in 2017, then followed that up with a Robert F. Kennedy Journalism Award in 2018, and last year he was a Pulitzer Prize Finalist.

“The phrase 'laugh until you cry' could not be more appropriate when reading this book," says Clover Press co-founder, Nate Murray. “We're all huge fans of Tom the Dancing Bug and we're excited for this to be the first in a large collection of works from Bolling. Clover Press plans to build a full catalog of complete Tom the Dancing Bug collections over the coming years."

Tom the Dancing Bug: Into the Trumpverse features a foreword by the author Neil Gaiman.

Tom the Dancing Bug: Into the Trumpverse isn't the only title from Ruben Bolling that Clover Press will be offering this May. Through the Cloverpress.us website, fans can currently pre-order The Super-Fun-Pak Comix Reader, a collection of his Super-Fun-Pak Comix (tm), one of the most popular Tom the Dancing Bug features. They've been a staple on the internet for years, often going viral for their absurdist and bizarre, yet oddly nostalgic, humor.

To find future updates from Clover Press on Facebook, Twitter, and Instagram, and to learn more about the team you can get inside information from each Clover Team member by signing up for the newsletter here: https://tinyurl.com/cloverpressnews.

YOU CAN PRE-ORDER THE BOOK NOW

Praise for Tom The Dancing Bug:

"God bless Tom the Dancing Bug! Funny, succinct, and highly original, Ruben Bolling is able to make sense from the chaos and tragedy of America's political nightmares and make you laugh while doing it. An increasingly rare and more difficult feat these extra bleak days. This is worth your time and money. Do it!"

"Behold the wondrous, whimsical, witty world that is Tom the Dancing Bug! If you're someone who's not a fan of potent political humor with an incisive absurdist twist that's not only consistently funny, but downright therapeutic for an ailing world, I suggest you avoid this book like the plague. For everyone else, it's a MUST-READ!"

"Delve into the dementia, the dread, and the delightfulness of this collection of Tom the Dancing Bug's strips -- it's history through the lens of a self-loathing insomniac. In a way, it's all of us."

"Ruben Bolling has been sending me his secret messages for years, in the form of comics printed first on paper, and then, once paper became extinct, on the internet. I don't know exactly what he's trying to tell me, except he seems to know about everything I find funny, delightful, strange and inexplicable to get my attention, from obscure literary references to negging deep dish pizza. I don't understand exactly what exactly he's trying to say to me, but I still obsessively keep reading, not just because he's hilarious, but because someday I hope to find out who this Tom the bug is, and why he is dancing."

"This fine collection of work by Mr. Bolling provides ample evidence as to why he is unanimously considered one of the greatest cartoonists in the known universe. How he would rank in that other part of the universe is, of course, a matter that’s still being hotly debated within the scientific community.”

"I am a HUGE fan of Tom the Dancing Bug! It makes me laugh and think of course but it makes me feel better. No kidding, I read it and I think, someone else thinks like me, only funnier and better informed and I feel good. Thank you Ruben Bolling for giving us Tom The Dancing Bug."

"That fact that Tom the bug can keep dancing in this day and age is a testament to Ruben Bolling’s skills as a cartoonist!"

“Each week Ruben Bolling takes an unassuming little blank white rectangle and fills it up with clever cartoonery, sneaky commentary, and more political laughs than you can shake a stick at. All hail Tom the Dancing Bug!”

Back to News & More!
Use left/right arrows to navigate the slideshow or swipe left/right if using a mobile device
Your are successfully subscribed for email notifications.
✖